This is a close up of one of the broken windows on the side of the house after a break-in.

This letter addresses Pam Dirnberger’s failure to pay bills for my mother. Below I cover all the inaccuracies in her letter.

1.  I clearly explain the VA benefit in My Guardianship Nightmare.  Not to mention she continually referred to this as my mother’s VA pension.  It was a benefit not a pension and there is a difference.  I would expect that someone who handles wards finances to know the difference.  Secondly, Pam Dirnberger applied to be my mother’s fiduciary and was denied.  She was never appointed her VA fiduciary.  Isn’t it interesting that my sister was qualified and my mother’s guardian/conservator wasn’t??

2.  Pam Dirnberger never asked us for bills.  She only ever asked for bank accounts in any communication.  My sister handed her every bill in her possession the day of the inventory on May 14, 2014.  When I confronted Ms. Dirnberger about that in court, she did then admit to scanning them at her office. (Apparently, that was all she ever did with them because she never did pay her bills.)  As for the taxes, I would also believe that a Public Administrator handling wards property and assets would know how to obtain a tax bill and also should know that taxes have to be paid on property.  I would like to note that the tax office in that county is right across the street from her office, so it shouldn’t have been difficult for her to locate.  Lastly, I would also add that she did have access to my mother’s bank account, which she closed without changing any of my mother’s direct withdrawals.  There was then a large overdraft on her account which was paid by my sister.  She was never reimbursed.

One last thing about my mother’s bills–yes call me crazy, but I did expect her bills to be paid.  WHY??  Because she paid her bills all her life, she was never in debt, her home was paid off and we were paying all her bills the entire time she was in our care not to mention making sure that she lacked for nothing.  Wouldn’t I expect that the guardian should do at least as good a job as we did?  Was that too much too ask??  Apparently!

3.  As far as Ms. Dirnberger asking Carla about the condition of the home, I find that interesting considering Carla did not have access to the house and had not been in the home for over a year and a half and had done nothing to maintain it.  I do have pictures as proof of the damage that was done–broken windows, kicked in door, ransacked, etc…

I would also state that my brother-in-law was not only helping care for my mother 24/7, but he was going to my mother’s house to check on it twice a day, mowing the lawn, blowing leaves and anything else that was necessary because he cares about my mother and her things.   Not to mention that my brother-in-law even fixed the door after the break-in (picture below), when Pam Dirnberger did nothing to secure it.  However, after my mother was taken from us and her property was repeatedly broken into and now belonged to Scott County, Missouri why would he continue to do that?  Would you like to be told that you should maintain a property that didn’t belong to you?  Seems unreasonable to me.

The window that was broken in the door was covered and reinforced with wood by my brother-in-law, not by Pam Dirnberger, the guardian of my Mother and the property. 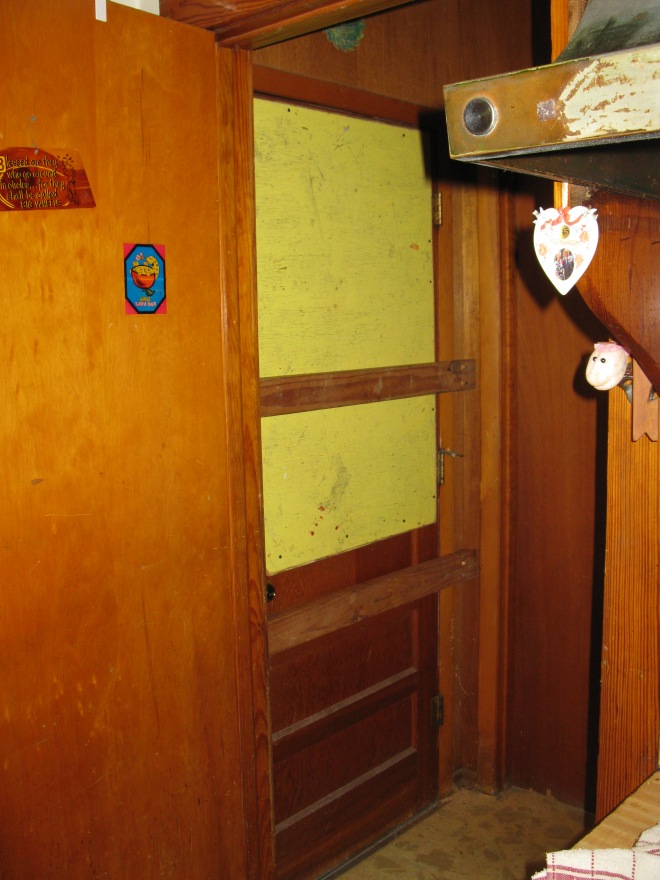