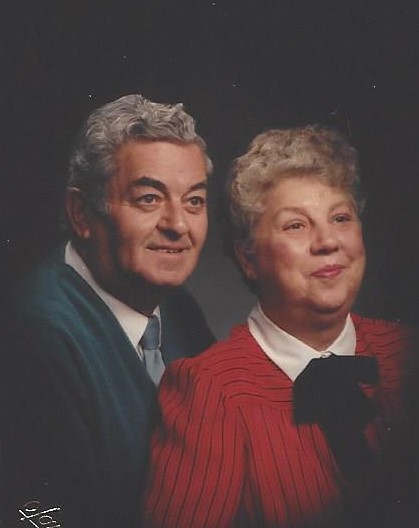 My parents, Raymond and Pauline Williams, had a normal, happy life.  They were married 61 years, raised four daughters and lived in the same house they built when they were first married. They worked hard all their lives and taught us to do the same.  We were not wealthy, but we had everything we needed.  Most of all we had LOVE.  My parents loved each other and their girls.  They faced hardship, made sacrifices and had success in life and family.  They saved and tried as best they could to put a little aside for their golden years.  They managed to pay their bills on time and build a good reputation in Sikeston, Missouri.  Two of their daughters remained in Sikeston (Ramona and Carla) and the other two moved out of state.  Rebecca lives in Kentucky and I (Teala) live in Indiana.

As they began to age, there were health problems.  My dad had problems with his body and my mother had problems with her memory.  Around 2005 my mother was experiencing symptoms of Alzheimer’s, but they had each other.  When my dad’s health problems began including hospital stays, things became more complicated, since my mother couldn’t be left alone.  During the last few years of my dad’s life, I began traveling to Sikeston to help my father and mother.  My father had concerns about Carla (daughter) having too much control over his affairs and he wanted to make some changes.  My parents had also been at my sister’s in Kentucky for about a month while my dad was recovering from surgery.  During that time Carla had been going through their home and removing the contents and things of value.  They returned home to find their home ransacked and my mother was furious.  She thought she had been burglarized and was even more disturbed to find out that it had been done by her daughter, Carla.  She was so upset that she contacted the police and a police report was filed.  During the time I was helping out, I discovered many things that were disturbing to me regarding Carla.  These are a few of the things: 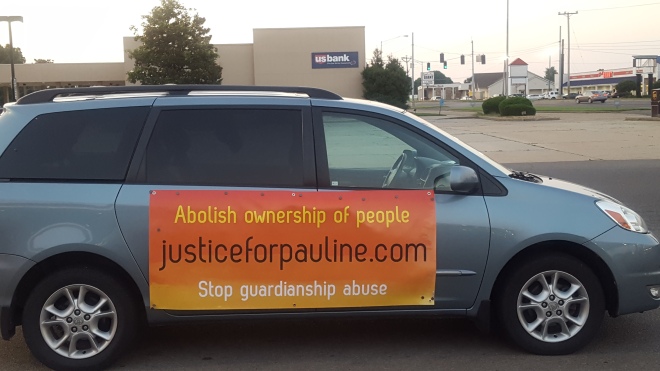 Why are these things about Carla relevant?  Because while we were caring for a dying parent and another parent with Alzheimer’s, she was busy “taking care” of their finances.  Believe me–I take no joy in airing our dirty laundry!  I only include these things because in our probate court hearing for my mother where I thought the truth mattered, where I believed the judge would look at the evidence I had and help protect my mother from predators and that right would win over wrong–I learned the hard way that is not true.  These things weren’t even presented because all that a judge needs to know is that there is family conflict.  Evidence doesn’t matter, proof doesn’t matter, love doesn’t matter, desire doesn’t matter.  Family conflict is all that is needed for your family member to be removed from your life and stripped of all their rights and freedom.  A judge can then say they are appointing a guardian in the best interest of the ward.  But who are we kidding!  Does anyone really believe this was in the best interest of my mother?

In the fall of 2012 my father was in the hospital for the final time.  He was having surgery and wasn’t sure he was going to make it.  I remember him desperately asking ALL his daughters to keep mother out of the nursing home.  I also clearly remember hearing my mother’s voice all my life saying, “don’t ever put me in one of those places.”  I know all her daughters heard the same.  I also clearly remember all four of his daughters standing around his hospital bed and promising to take care of mother and him and do what was best for them.  Even after the things that I had discovered about Carla, I still wanted to believe that she would keep this promise. Thankfully, he pulled through.  It was during his last hospital stay that he had the most traumatizing event in his life.  He wanted to be with my mother, so he was trying to get out of the hospital bed and pull out his tubes.  The hospital failed to follow protocol and call the Power of Attorney (which would have been me or Rebecca).  Apparently, Carla had told the nurse to call her instead, so they called Carla to get permission to restrain him.  Instead of going to the hospital to calm him and help him, she allowed them to tie him up!  He never recovered from having his hands tied to his bed for approximately 13 hours.  It was at this time that I realized that the promise made to him in the hospital was not being kept by Carla.  It was also during a conference with the hospital over this incident that we received our first piece of bad advice about guardianship.  We were told by a caseworker at the Dept. of Senior Services that the best way to protect mother was through guardianship.  I knew nothing of guardianship, so that sounded reasonable.  Although, I did know that my mother had given Ramona her Power of Attorney to protect her from Carla and placement in a nursing home.

Ramona, Rebecca and I took mom and dad home where he spent his last three weeks in our care before he passed away on December 1, 2012.  We moved mother to Ramona’s house where she lived for about a year and a half.

In May 2013 after an appointment with Dr. Curry with all three daughters to find out why two different wheelchairs had been taken away from Mother.  We decided to find another doctor for Mother because we believed that Pauline’s brother, Roy Eaton, (also a doctor) might be influencing Dr. Curry in some way.  Upon returning from Sikeston, Pauline’s daughter, Teala, received a phone call from Tanya Schrum.  Ms. Schrum informed Teala Mainzer that Dr. Curry had filed paperwork to have a state elected guardian appointed to mother.  Teala informed Ms. Schrum that her three daughters did not want a stranger appointed to be her guardian, but that we would file for guardianship.  Little did we know at the time what a tragedy would unfold in the probate/guardianship world.

Ramona, Rebecca and Teala filed for joint guardianship of Pauline Williams in order to share in the responsibility of caring for her and her needs as we had been doing since my dad’s passing.  Pauline had three daughters willing and able to care for her and honor her wishes (and Raymond’s) to keep her out of the nursing home and with her family.  Apparently, Carla and Roy decided to join together to have a Public Administrator elected by Scott County, Missouri become Mother’s guardian rather than any of her three daughters.  On April 1, 2014 Judge William Winchester after ignoring my Mother’s Power of Attorney and her prior wishes appointed Pam Dirnberger, Public Administrator, as Pauline’s guardian/conservator.  Ramona received a call from Pam Dirnberger that day stating that the Convalescent Center would be coming to pick my mother up and confine her to a nursing home.  We were able to delay that based on a letter from her doctor stating that it would be detrimental to her health.  Unfortunately, the judge also ignored the doctor’s letter and had her moved anyway.

Thus began our journey into guardianship.  I can honestly say that I began this journey very naïve to guardianship and the abuses that can occur, but now I have received an education into what a horrible tragedy this truly is.  I am also truly surprised at how quickly  Judge Winchester made this decision to remove all my Mother’s rights!  The decision was made the next day.  I guess when Judges are immune from any recourse for the decisions they make they can make quick decisions without taking time to ponder all the ramifications.  Guardianship is complete ownership of people, their property, their rights and freedom.

Let me say one thing that I have learned about the guardianship system at least in Scott County, Missouri and that is never place your fate in the hands of one person, one decision-the judge’s.  Don’t waive your rights to a jury trial!!  If I had it to do over again, that is what I can assure you I would have done.  I would never have allowed a court appointed lawyer, Frank Marshall, to waive all my mother’s rights.  The picture below shows what has happened to my mother since she lost her rights, freedom and personhood!

I AM SURE IF SHE WAS ABLE SHE WOULD PERSONALLY THANK EVERYONE WHO HELPED HER GET TO THIS PLACE!!  IT CERTAINLY LOOKS TO BE IN HER BEST INTEREST!  NOT TO MENTION A WONDERFUL WAY TO SPEND HER GOLDEN YEARS! 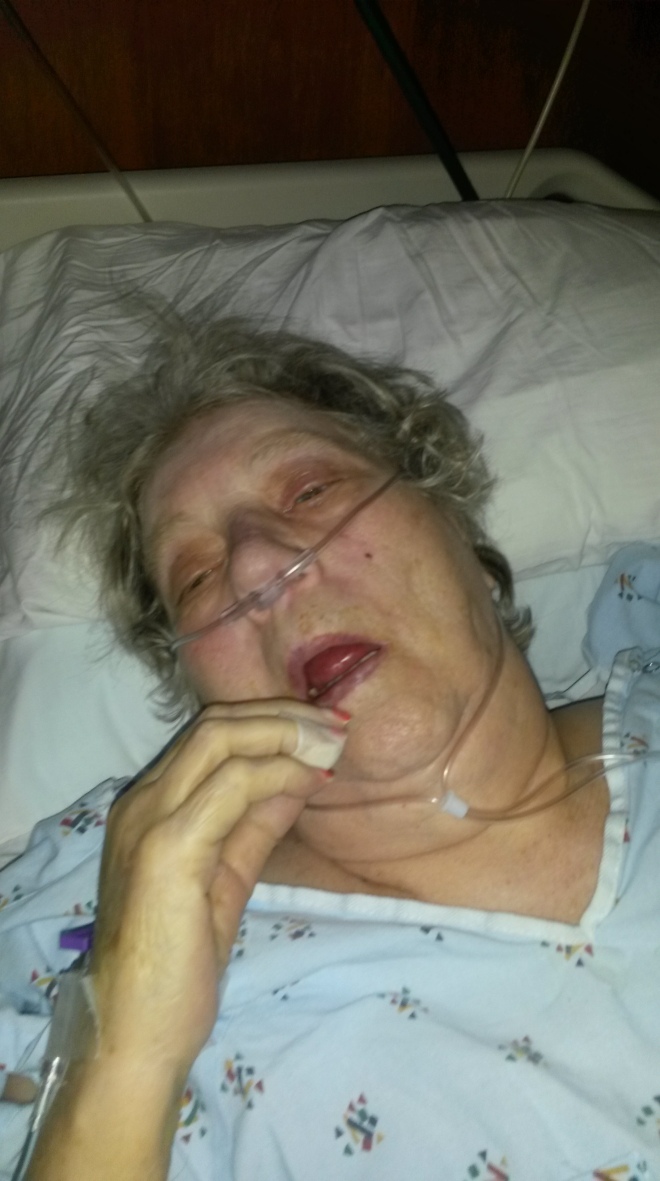